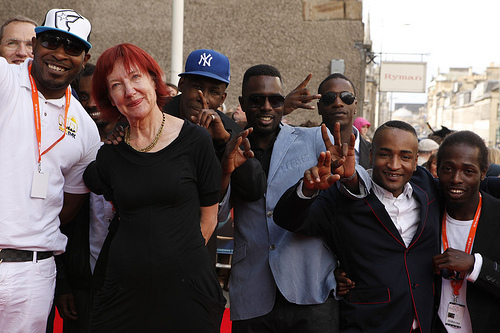 We are kindly supported by our patron, the award-winning film director Penny Woolcock.

Acclaimed director Penny Woolcock has produced a variety of work over many decades, ranging from documentary to contemporary Shakespeare to opera. In 2010 she spent eight months on the streets with London's homeless, drawing out harrowing back stories, and was later recipient of the Grierson Trust Award. In 2013 she produced the documentary 'One Mile Away' focusing on Birmingham's rival gang wars, and has since directed an expose on Britains underground dog-fighting scene.

Below is a clip of a talk Penny gave for students at the Cambridge School of Art in 2013.

Inner cities are little war zones in which bloody wars are fought. Gangs of young men stab and shoot each other 'on sight' for straying into the wrong postcode. The rest of us cross these front lines every day without knowing it- but if you're a young man from, in this case, the Jamaican community in Birmingham you are in mortal danger whether you are armed or affiliated or not. Most of these killings and stabbings don't even make the local news.

One Mile Away tells the human side of gang violence, of people who are both perpetrators and victims. These are issues that are hard to understand and seem impossible to resolve. This film is a rare opportunity to do both. This is up close to the young men who are right at the heart of British gang violence and who wish to change things from the inside out.

Any cookies that may not be particularly necessary for the website to function and is used specifically to collect user personal data via analytics, ads, other embedded contents are termed as non-necessary cookies. It is mandatory to procure user consent prior to running these cookies on your website.